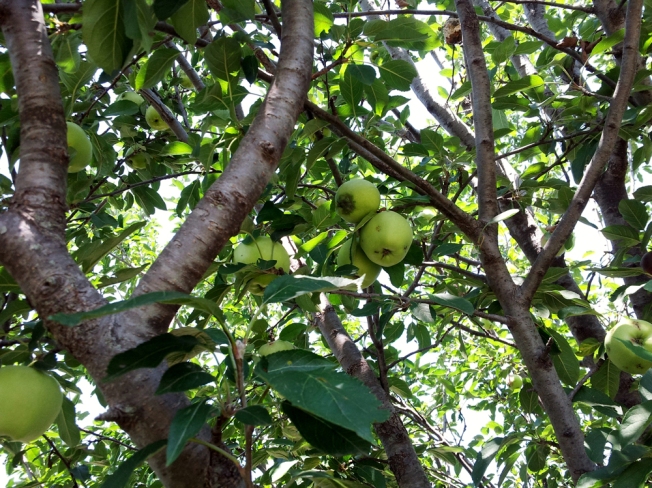 Saturday Pa got a call from Honest Mike that the apples on his tree were ready for picking. We scooted our butts right on over there Sunday to do some serious picking. Pa has been threatening Honest Mike for the past three years that if he knocks that old apple tree down he might just never speak to him again. Rumor has it that tree has stood there for decades.

A whole crate full of fresh picked Granny Smiths… How purty is that? I asked Honest Mike what he would like in return for all these fine apples, as soon as the words apple butter were out of my mouth, he said no need to say any more. All right, order placed. Now, I have to admit, when I see a big bunch of apples my first thought is always of my Grandma. She gave me my first canning lesson using apples much like these. For that reason, I am always inspired to make apple butter and apple jelly. As I go through the motions, I can still see and hear her in my head and heart, talking me through it all. She was a great teacher, I did the work, and she guided me along the way, just as in life. 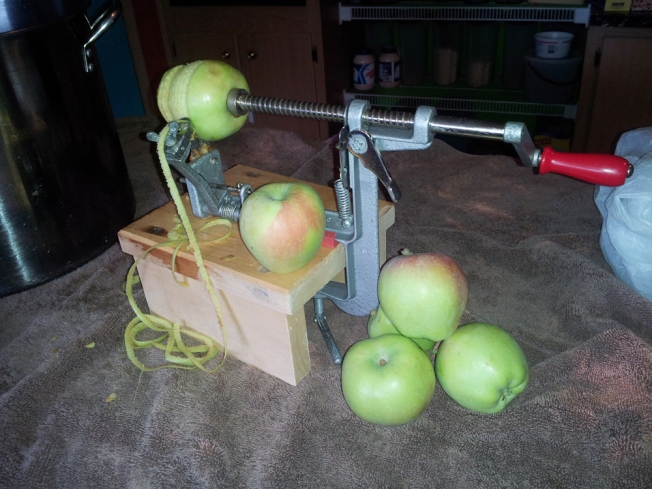 So I begin. First thing is to wash all the apples, I wash a few as I go. I put a towel down over my new tile island top. Yes, I am weird that way, previous experience with this peeler reminded me how messy this could get.  I start with my pot filled with water about half way up.

As I peeled the apples, I put them right into the pan. They wanted to float, but I just kept cramming as many in there as I could. I used my 2 largest stock pots (I think they are 20 or 24 quart) hereafter known as my canning pots. I added water as needed to until the pot was as full as I thought it should be, and that I could still carry. I turned that burner onto the highest speed possible and  put the lid on it so that it would boil faster. I then waited for what seemed like days for it to boil. Once it finally boiled, I reduced the heat to just above low and went back to peeling for the second pot. 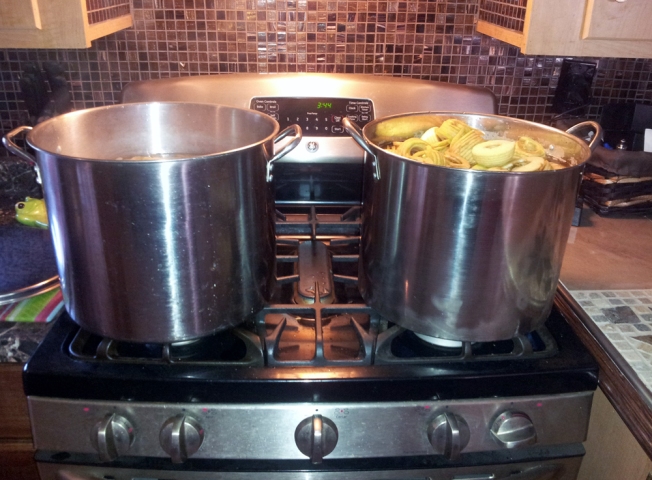 One pot cooked down and cooling, and the other just finished and put on. 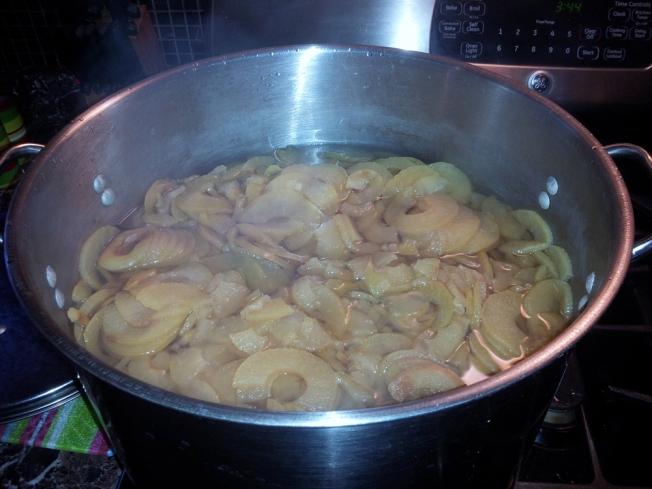 I stirred the apples regularly to keep them from scorching, and let them go until they were good and soft. As you can see, they cooked down quite a bit. Then I washed up the dishes I dirtied and sat back for a bit.

As I peeled I put the cores in one bag for the chickens. They love them.

A bag full of peels for the goats and pigs. They look forward to apple canning days.

Check out my vintage Foley food mill. I found it at a little flea market we stop in whenever we pass, every other month or so. As soon as the apples were cool enough to handle, I went to running them through it. I absolutely love it. I was turning that mill for what seemed like forever. 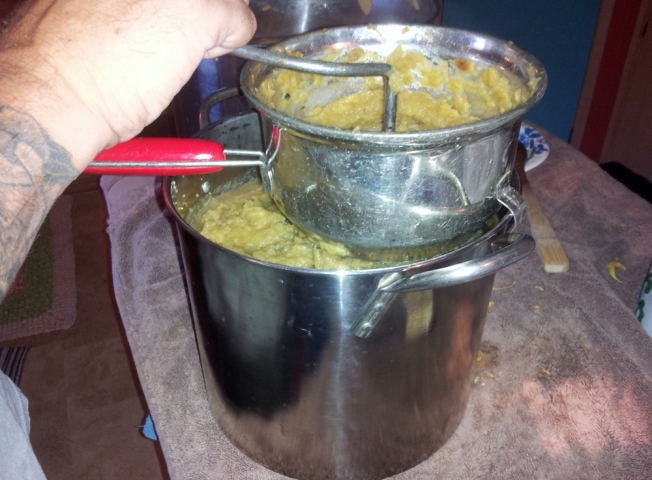 Pa came in from work, and bless his heart he took over the food mill to finish things up. I think he could see I was about beat. That tick fever still creeps up on me a lot more often than I like or appreciate. While he finished making the apple sauce, I worked on getting my juice strained. I pride myself on a nice clear jelly, the first step to that is a well strained, clear juice. 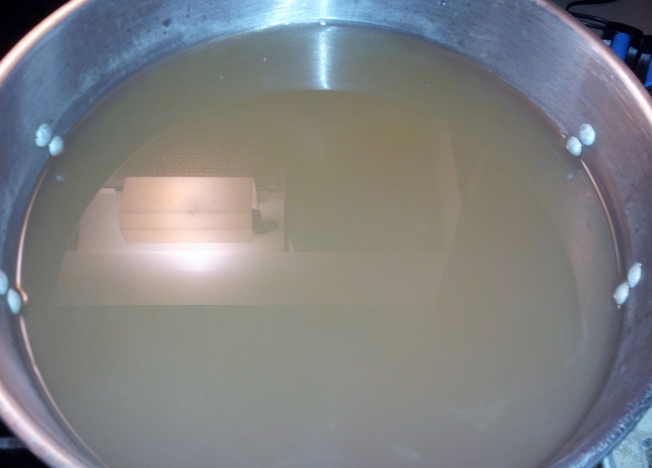 I got a nice amount of juice that will make a jelly so purty that you just smile when you see it.

These two pots represent a good hard day’s work. My arm was hurting and I was done for the day. I had to let the juice cool completely, or at least enough to put into freezer bags. 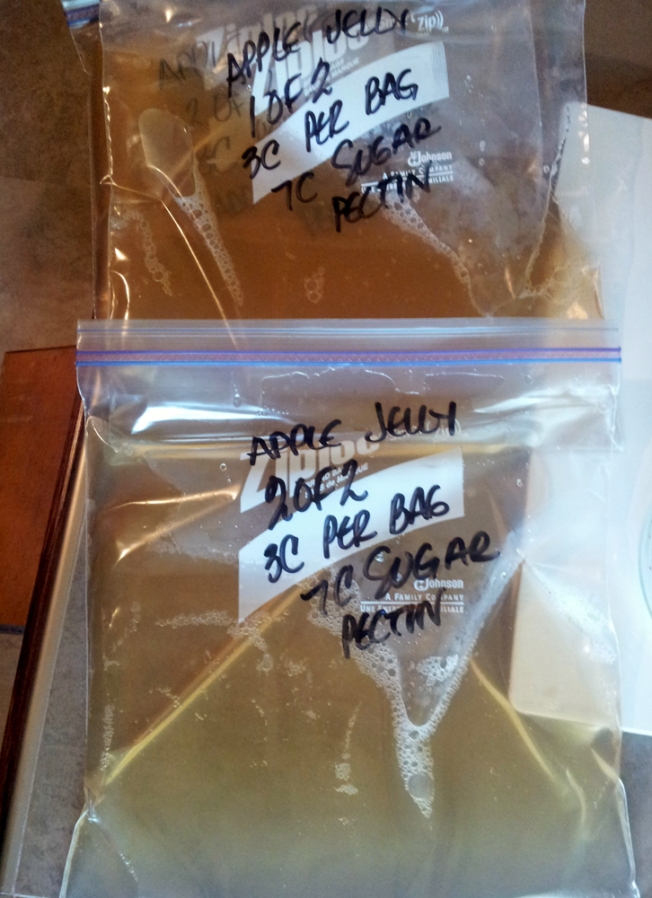 The next morning, I measured the juice, and put it in gallon freezer bags. I went ahead and wrote all the pertinent information on the bags as I went. I will sure be thankful for this later, sometimes I think I look for my recipe longer than it takes to cook whatever it is I am making. 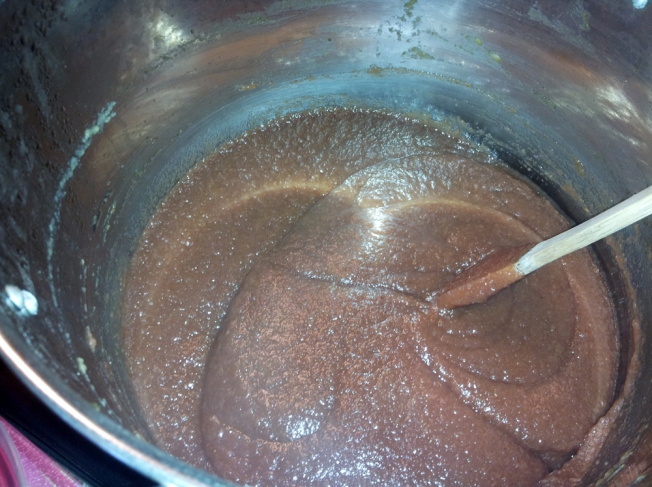 I separated the apple sauce between the pans, and added the ingredients. This is the candy apple butter. It is more red in color. I did read you could add a few drops of green food coloring to create a true deep brown, but to me that is  just false advertising.

This is the traditional apple butter. I brought both pans to a boil, then reduced the temperature to low and pretty much spent the next few hours standing and stirring, washing a dish and stirring, cleaning the counter-top and stirring, getting my jars ready and stirring.  Oh, and did I mention stirring? The longer I stirred, the thicker it got. The thicker it got, the more my poor arm screamed in protest.

You want to cook apple butter until it is nice and thick. When you put a spoonful onto a cold plate, if any juice runs out it is not ready, go back to cooking, standing, and stirring. When you pick the plate up and hold it at an angle and it doesn’t “drip” at all you are golden.

I started pouring into my hot jars. Remember, hot jars, otherwise they can burst. This big jar is the first poured, and it is going to Honest Mike. 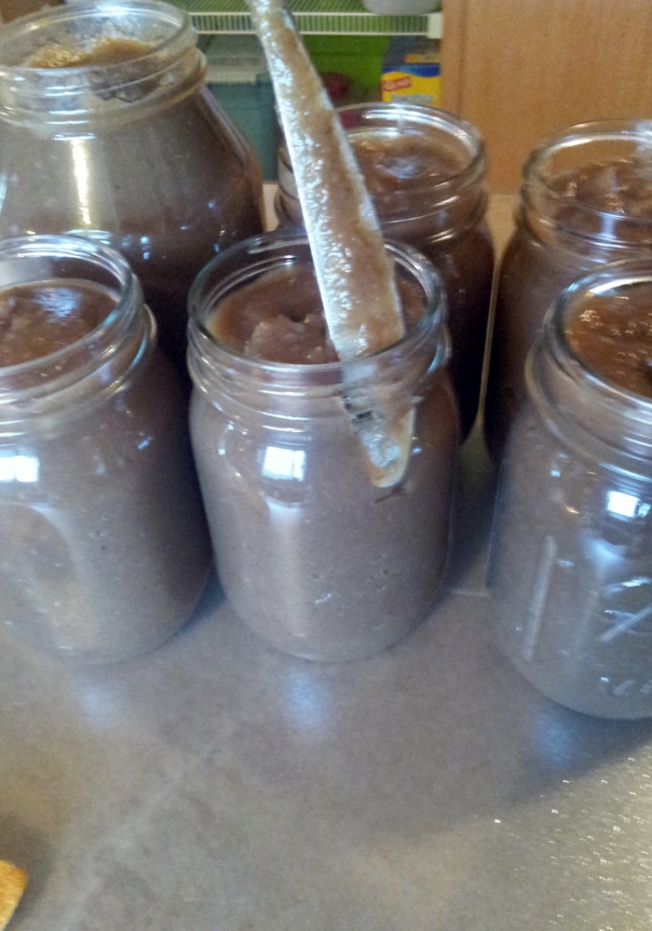 Here it all is… Yes I am not prefect, I see I missed an air bubble right there in the front. Oh well, it all eats the same. I ended up with eight and a half pints of the candy apple butter on the left, and ten pints and Honest Mike’s quart of traditional apple butter. Yes, that is a different jar than the first one shown above. Mental note… When using jars, make sure the ring will screw down before filling with scalding hot apple butter, it’s just easier in the end. 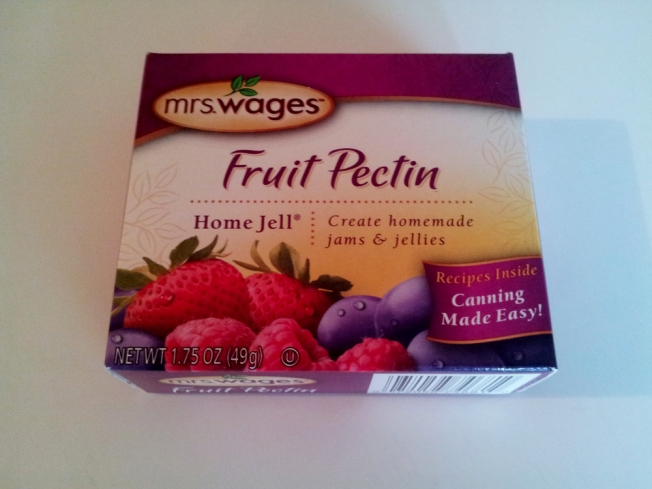 This morning, when I dropped Fish Taco at work, I picked up some pectin to use with that juice I had in the freezer. I just had to make Grandma’s candy apple jelly.

Here’s her secret ingredient. Yeah, yeah, I know it’s not so much of a secret, lots of people do it. You, however were not in the presence of my grandmother that day as she told me of her secret ingredient. You did not see the little twinkle in her eyes as she disclosed her secret. You did not hear her voice, as she lowered it in a conspiratory manner as though she were engaging in espionage or something. That is such a great memory.

I added the red hots to my juice, heated it at medium heat and stirred until all the candies were dissolved, then added the pectin and proceeded as usual. Once it came to a full boil, I added my sugar and brought it to a full boil once again. I let that boil for one minute, then went to filling jars. 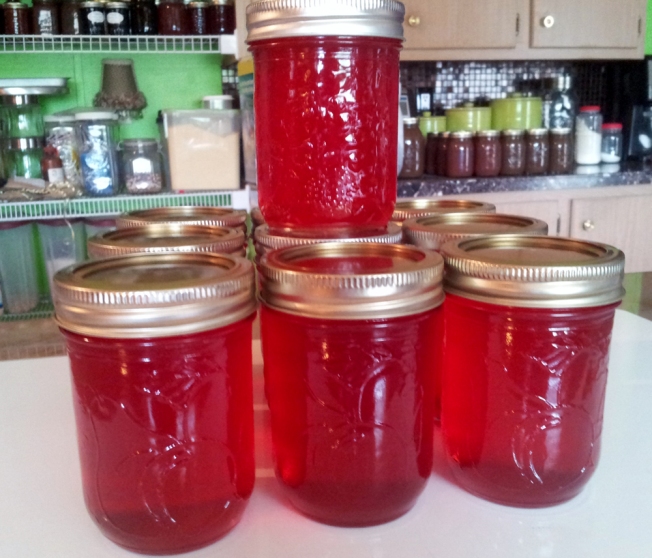 3 thoughts on “Honest Mike and Grandma”